Discussions about new technologies could be absurd because it is difficult to make predictions. Hindsight is easier than foresight.

But what are cryptocurrencies?

Maybe just “everything you don’t understand about money combined with everything you don’t understand about computers“, as John Oliver said? People are confused, and most of us do not understand what happens in towns like the “Crypto Valley” (Zug, Switzerland). And that’s not just because of Bitcoin, Ripple and other cryptocurrencies, whose impact on money, finance and technologies should not be underestimated. The confusion is caused because almost every one of us knows someone who wants to conduct an ICO, an Initial Coin Offering, to collect money from investors for a business model or venture. Are cryptocurrencies and ICOs just “hot air”?

And here is my warning

Do not invest more than you are willing to lose. Why? From my point of view, around 90 percent of the new ICOs will fail, in the same manner as the majority of the start-ups fail. So, if you want to invest and buy coins (and tokens respectively), please read the white paper of the issuer carefully and try to get an idea of what the idea and concept behind the ICO is. The ICO-teams should present the prospect of a stable and good (or better, innovative) business model and also provide an early prototype or better, a minimum viable product of their implementation. And, they should mention all the risks for investors.

During the last few weeks, I had three business inquiries in this field.  For all three of them,  I was asked if I could help with an ICO as an advisor and coach. Sure, I have the knowledge to help and do precisely this but usually, I also check classic aspects such as the complete business model including the value propositions, the customer segment, the team setup, and so on. And when I look back at the inquiries of the last weeks, I have to say that the majority of the ICOs which are planned are based on immature business models. In reality, what most of the ICOs sell, is just actually “hot air” and not a carefully considered business idea.

And the underlying application space on the blockchain (so-called “smart contracts”) is often of bad quality and can have security issues. Due to a recent study, at least 34,200 of 970,898 analysed smart contracts were vulnerable at that point of time (it is somewhat likely that this number is only the top of the iceberg).

We are on the ground floor of a new paradigm, with all the accompanying symptoms, including skills and experience shortages.

Do not get me wrong.

But now, let’s come to the positive developments in this area. There are lots of genius ideas and models out there which are worth to be noticed. Just think of the concept of decentralised insurance policies based on Blockchain technology like the one provided by Etherisc in Zug. Or think about ideas for electronic medical records (EMR) such as Medicalchain. I cannot wait to look at these concepts realised based on blockchain technology (Etherisc has a great pilot/demo, just have a look at their website and the Flight Delay Insurance App). 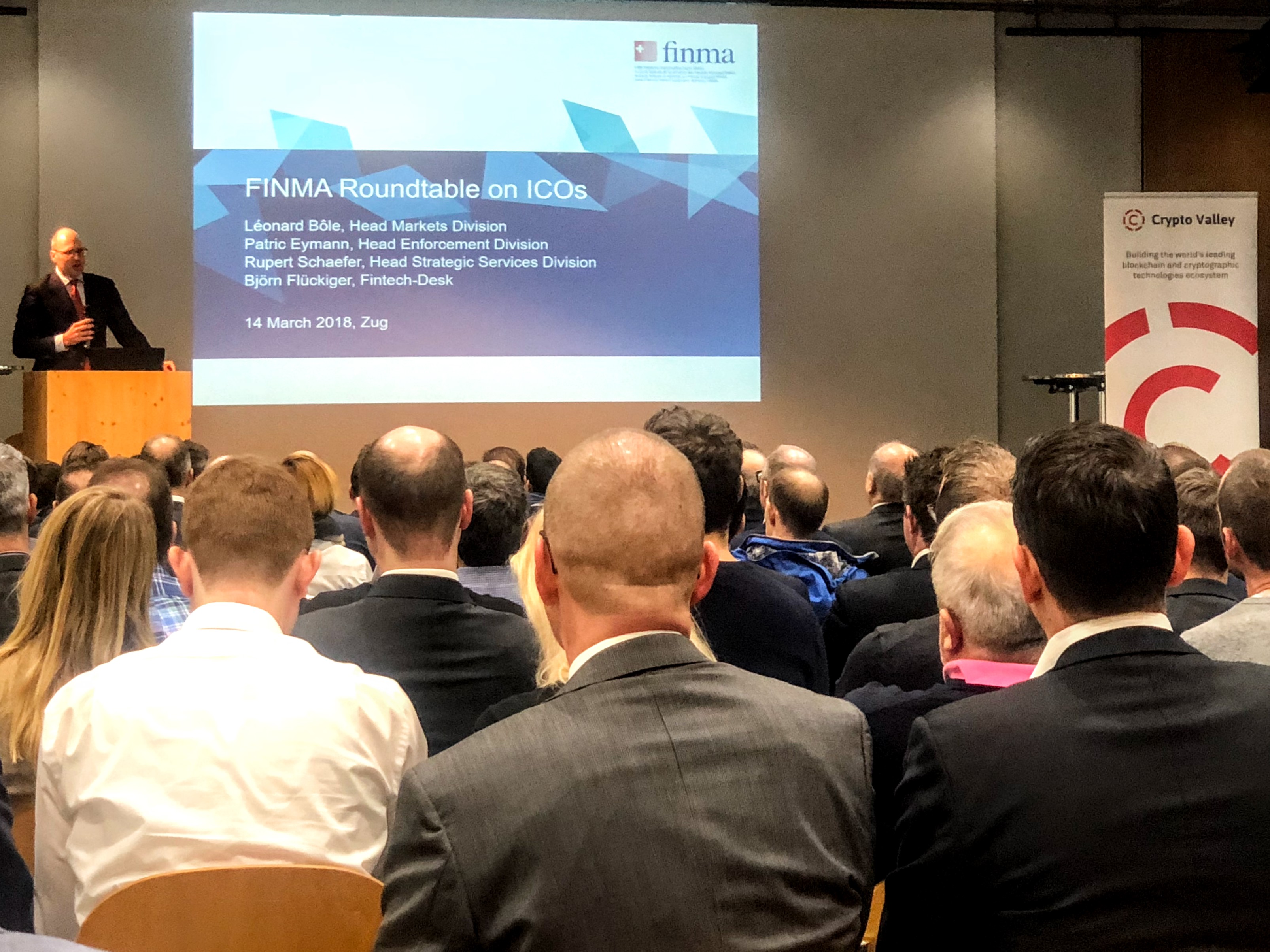 This is real: Full house – FINMA roundtable on ICOs

In the meantime, the first guidelines for ICOs have been published. For example, there are the “ICO code of conduct” composed by the Crypto Valley Association  and the Swiss FINMA (Swiss Financial Market Supervisory Authority) “ICO guidelines”. I strongly recommend having a look at these guidelines and to give the authors feedback.

To take inventory, please find  the most important facts of my post below:

And again, as I have already mentioned, I would appreciate a more reflected view of other experts in this area on what happens in the Blockchain & Crypto field.

Do not hesitate to get in touch. If you have any questions, follow me on twitter or Scope.

Based on lean & proven methods & frameworks such as OKR, we drive strategies, organisations & change in the digital & agile age. We are well connected to a great network and experts, amongst others to organisations such as D_BREAK and great partners.

Any cookies that may not be particularly necessary for the website to function and is used specifically to collect user personal data via analytics, ads, other embedded contents are termed as non-necessary cookies. It is mandatory to procure user consent prior to running these cookies on your website.